The police force of the Australian state of Victoria wanted the civilian equivalent of a pocket battleship: maximum capability within minimum dimensions; specifically, within dimensions that required only coxswain’s qualifications.
Needed capabilities included speed, shallow draught, propulsion that coped with debris in the water, endurance, deck area for various tasks, overnight accommodation, interior space for conducting operations and towing ability.
This all had to be within a hull that coped with adverse conditions while giving its crew the best possible working environment. It was to be the go-to boat.

The hull that fitted the bill was the Pantocarene ORC form, familiar to many as the basis of Hart Marine’s highly regarded pilot boats. This European design evolved to suit the needs of Europe’s armed forces, police, search and rescue services and other bodies needing small vessels that operated largely without regard for weather conditions.

Victoria Police did its homework thoroughly before approving the design concept. So too did Queensland Police, which has ordered a 15-metre and a 17-metre versions from Hart Marine.

This hull has a wave piercing bow with a fine beak and a big flare above it. Combined with suitably adjusted trim tabs it copes with seas from any direction with minimal pitching. There is nothing novel about the wave piercing Z-bow concept, but the ORC has been in a process of constant refinement for over 30 years. “State-of-the-art” is an overworked and often throwaway phrase, but it exactly suits this hull.

As does it suit Hart Marine’s construction techniques. An Australian pioneer in resin infusion, the builder produces exact resin-fibre ratios in fibre-rich hulls, and exerts total control over weights. These hulls have a minimum 30-year life under hard working conditions, meanwhile maintaining a far lower noise profile than any rival material. 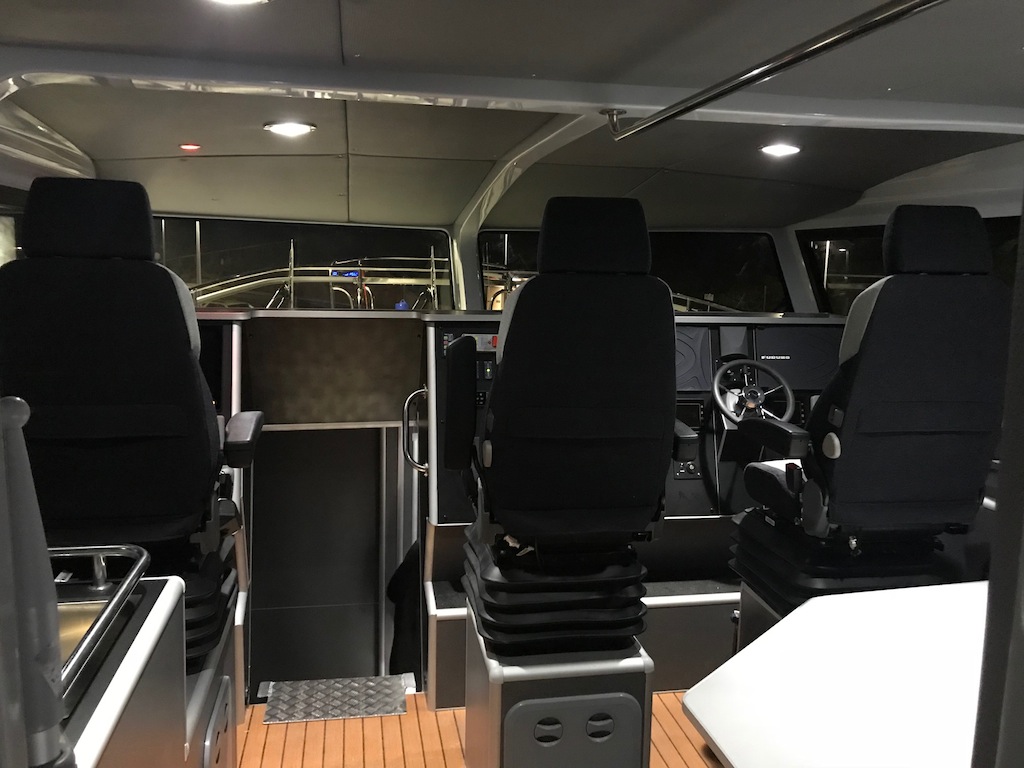 In traditional pilot boat form a Pantocarene has the wheelhouse set aft, but Victoria Police wanted working deck space there so the wheelhouse location has been positioned further forward. This puts it ahead of the engine space, contributing to reduced noise and vibration. The wheelhouse is notably quiet with the sound level below 75db.

This is a roomy compartment with the air volume continuing well ahead of the control position, terminating at a forward raked windscreen. It contains a dinette, with the secondary role of plotting position, and a basic galley. The dash has an inevitably busy face, but its logical layout allows a quick mastery of the electronics and controls. Being a police vessel the communications suite is on the busy side of comprehensive, evidence of this being the aerial farm above the wheelhouse. 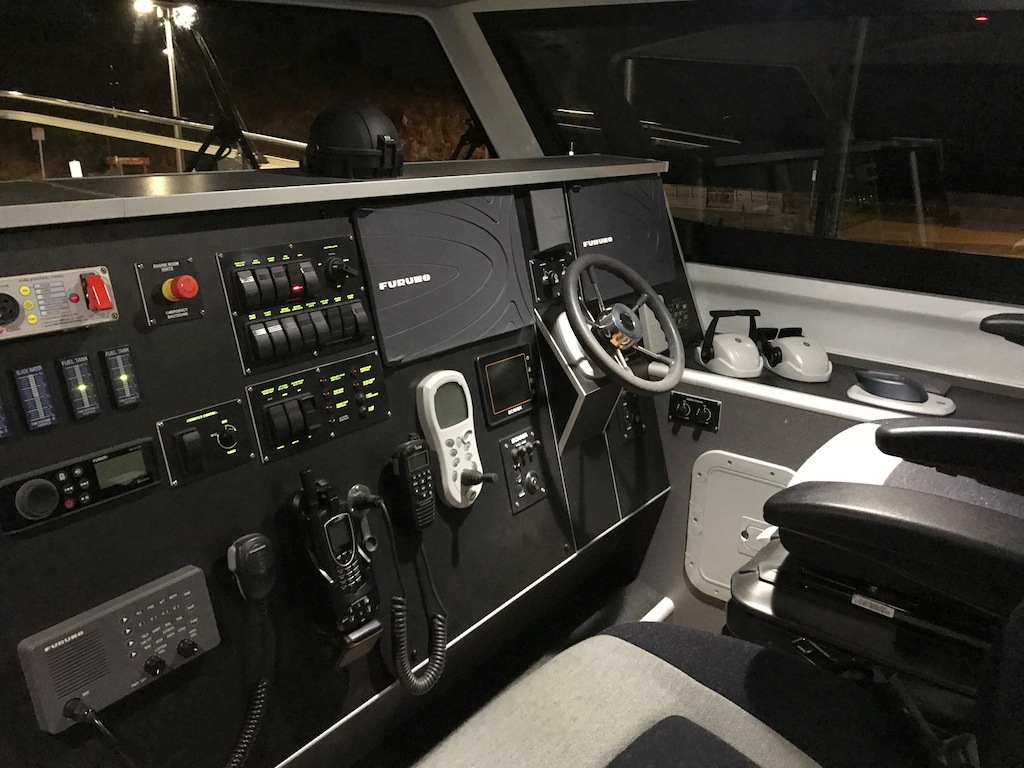 Below and ahead of the wheelhouse is the overnight accommodation. This is located in the (relatively) higher motion area, but the need for sleeping when actually under way is likely to be rare. The accommodation consists of a pair of two-berth cabins and a far-from-sketchy bathroom, containing toilet, shower and wash basin. The water is fed from the 300-litre capacity fresh water supply.

Shallow draught without fear of propeller damage dictated jet drive, and the result is a boat able to operate in thigh deep water. The combination of a pair of 485kW main engines and Hamilton HJ322s delivers a maximum speed of 38 knots, comfortably in excess of the contracted 35. Cruising speed will be 30 knots. Fuel capacity is a substantial 2,200 litres giving that wanted range. 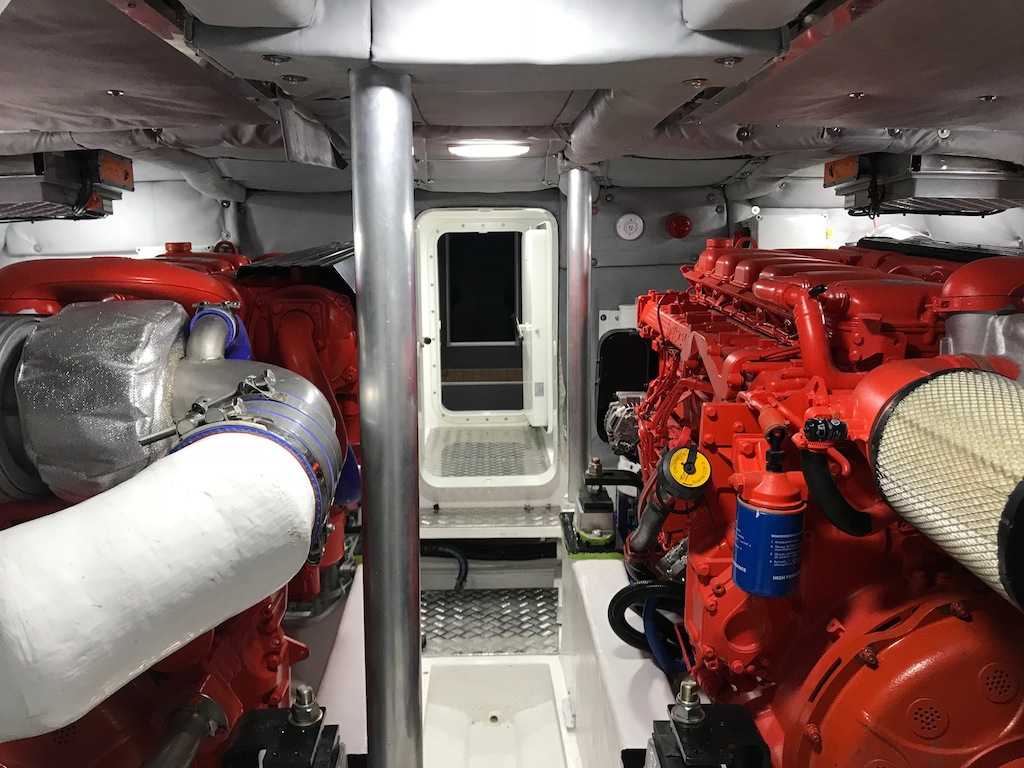 The after deck is set up for diving, towing and recovery. With openings at each side and at the transom, door area is greater than that of the bulwarks. Deck area is effectively extended by the protective platform above the water jet nozzles.

A 500kg crane is mounted aft for recovery work or the hoisting aboard of, for instance, a police jet ski. A broken down leisure jet ski or dinghy is also a likely customer. For larger breakdowns the coxswain has the choice of single point towing or the use of a bridle deployed from bitts at the quarters.

Contrary to uninformed opinion jets are a good option for towing, Harts point out, the trick being to get the right match between motor power and jet nozzle diameter; commonly, too small a diameter is chosen. 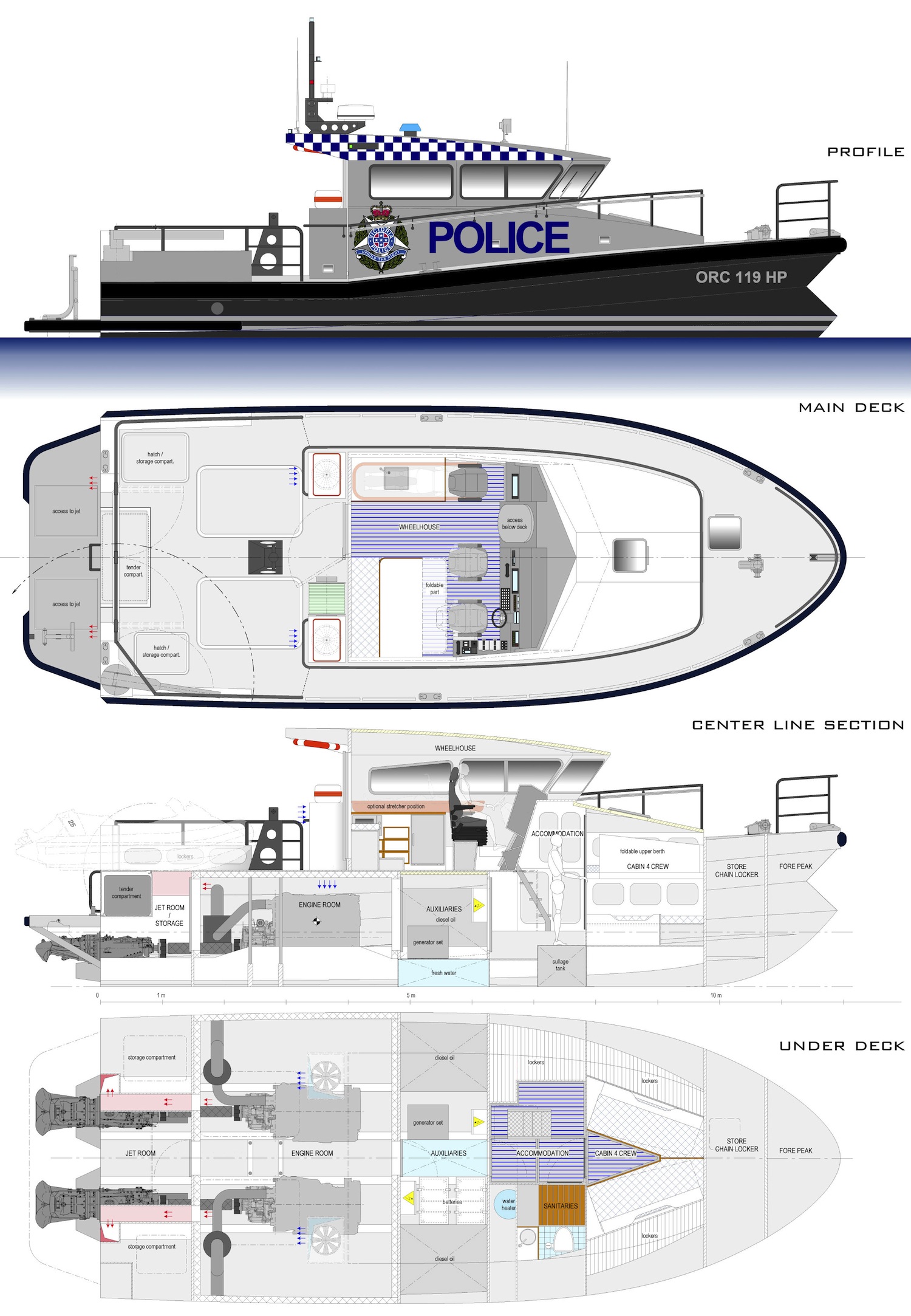